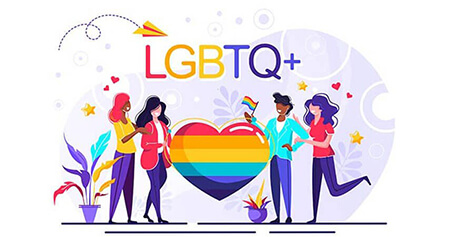 The social media has been going gaga over all the colourful, happy faces of LGBTQ couples donned in designer attires and costumes for their D-Day.

Several big names in the luxury designer wear space have found this as a new strategy to market their brand. Many like Anita Dongre, Shantanu and Nikhil, Gaurav Gupta, Rohit Gandhi and Rahul Arora are now into dressing same sex couples for their weddings.

What is the brand message these retail giants are trying to convey with this new trend that is taking the social media by a storm?

These celebrity fashion designers are breaking stereotypes and stepping into new avenues by designing and publishing images of their happy same-sex couples clients. Apart from promoting an inclusive society, they are also opening up a new market and expanding their target audience.

According to Sabyasachi Mitter, Founder and Managing Director, Fulcro, “World over, historically, brands have realised that issue-based activism drives brand salience and is good for business, this is more so in the fashion fraternity which has been at the forefront to support the LGBT community. Brands like Reebok, Adidas, Puma, Converse Brooks, Nordstrom and Bloomingdale’s have teams that work specifically to create products for the community. Brands like Benetton have made a success of this much earlier. Indian fashion designers are now going mainstream and hitting media headlines with their ensemble for gay couples. After all, this makes good business sense as it gets you the limelight and the money.”

Kiran Khalap, Co-founder and Managing Director, Chlorophyll, a brand and communications consultancy, spoke about Anaïs Nin. Khalap said, according to Nin’s philosophy, ‘You don’t see the world as it is, you see the world as you are’. So you could dismiss this as exploiting a social trend or contributing to a community that was denied the right to publicly own the best till now. I see the latter in what leading designers are doing.”

During a conversation with Shantanu and Nikhil on this latest trend on social media, the designers said:  “Shantanu & Nikhil as a brand has outspokenly exhibited their stand on egalitarianism. We strongly believe that both men and women have masculine and feminine energies and each of them use the respective energy when required. S&N are only enunciating their anti-trend phenomenon, which sees couture from an egalitarian approach. Hence, Shantanu & Nikhil Couture is designed renouncing any distinct boundaries but rather creating a liberation of thought and design values. We see the young millennials relate very well to our couture collection, as we do not sell a product, but rather narrate a story through our creations. This is what the young luxury consumer is looking for; they prefer to buy experiences rather than an outfit. Thus, through our collection we enunciate stories and liberate experiences that make the millennials want to be fixated to our pieces.”

Other designers too spoke about the trend promoting ideas of equality and oneness.

Fashion Designer Reynu Tandon said: “What designers are trying to portray is simple – that love is pure and is not limited to gender. We are showing that a couture outfit is made with love and we are selling it to pure love.”

Elaborating the idea, Rina Dhaka said it really doesn’t matter for designers whether they are designing for a bride-groom or groom-groom or a bride-bride couple. We as designers cater to the requirements of our clients. We, as a fashion industry, try to establish equality through our designs. Fashion doesn’t discriminate. We are happy about the fact that now everyone has opened up about the LGBTQ community and are celebrating their weddings and are happy serving our clients.

In some of the recent same sex marriages, Anita Dongre designed an ensemble for an NRI couple residing in America – Amit Shah and Aditya Madiraju, who tied the knot in a traditional ceremony. 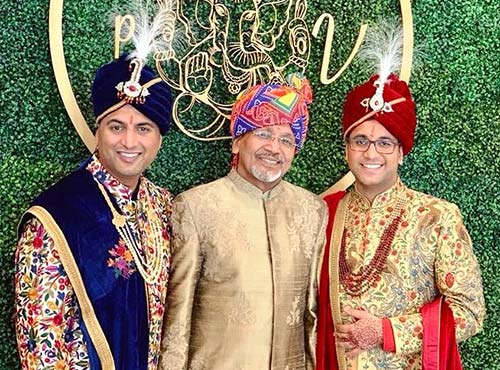 Businessmen Parag Mehta and Vaibhav Jain married in a traditional Indian wedding style in the US wearing Gaurav Gupta. Hotelier and Executive Director of The Lalit group of hotels, Keshav Suri, and Cyril Feuillebois wore Shantanu and Nikhil for their wedding.

The luxury fashion space has thus found a new arena of marketing where love and oneness is celebrated and this trend is here to stay.